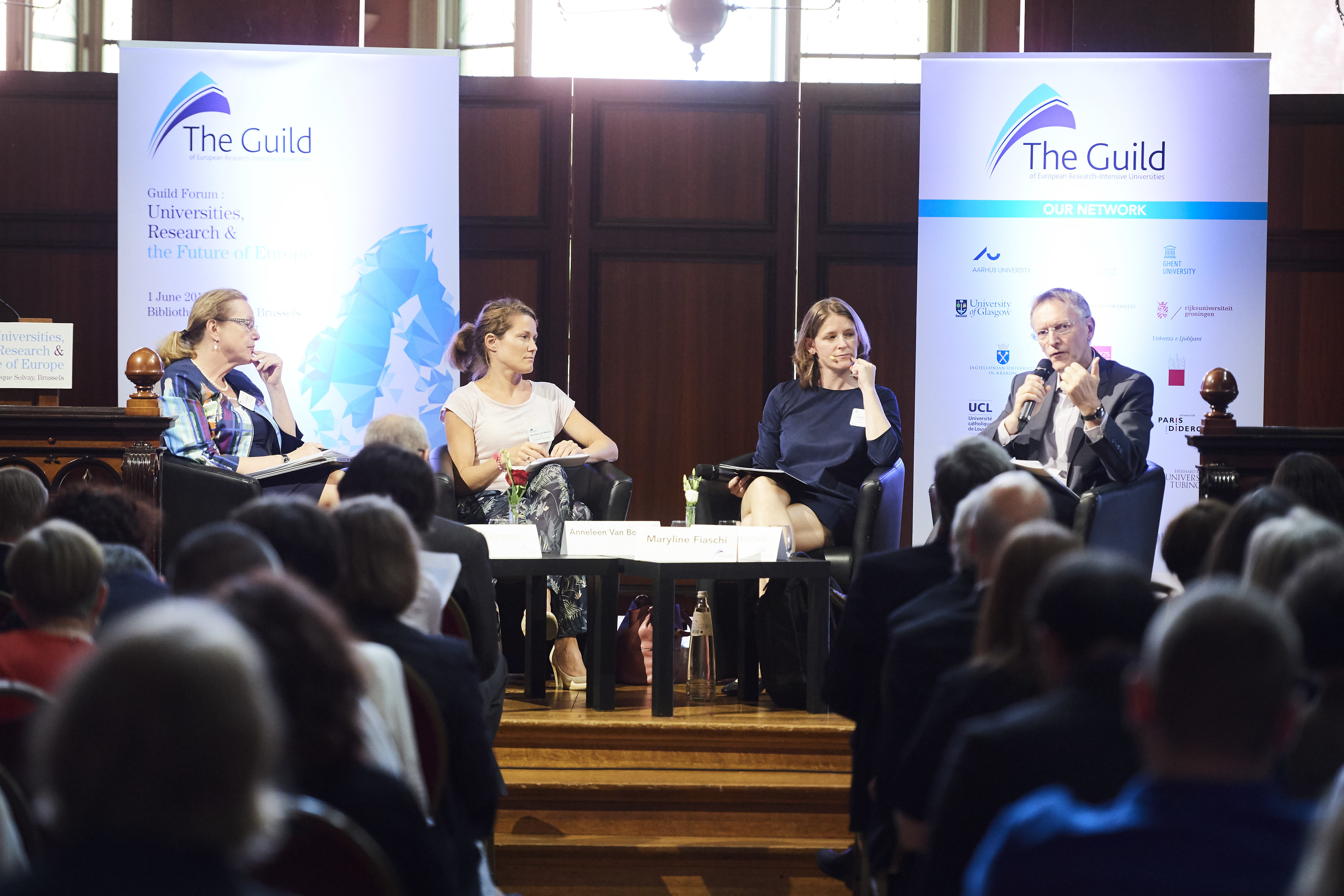 On 1 June 2017 The Guild welcomed rectors, vice-rectors, and professors from its network of universities to the Guild Forum at Solvay Library in Brussels, to discuss how ideas about research and innovation in the next Framework Programme (FP9) are linked to a future vision of Europe. Guests included representatives of research organisations, the European Commission and Parliament, Brussels stakeholders and numerous European universities. The discussion was moderated by Maryline Fiaschi, Managing Director of Science|Business.

Laying out the context for the discussion, Brian Bech Nielsen, Rector of the University of Aarhus, spoke of the uncertainty following Brexit and the waves of polarising political discourse throughout Europe. He underscored the opportunity for European university communities to help set the agenda for FP9 and the future of research and innovation.

Robert-Jan Smits, Director-General for Research and Innovation at the European Commission, charted the process for preparing the ninth Framework Programme. He outlined the priorities, including continued support for excellent frontier-led research, a renewed focus on innovation, and increasing global participation. Advocating an enhanced budget for the European Research Council, Smits emphasised the critical importance of excellence for research and innovation – a point reinforced by Jan Palmowski, Secretary-General of the Guild, who noted that in no other part of the world was there such intense competition for the best ideas across borders. Smits described a revised timeline, noting that the next budget would not be announced before the Summer of 2018. For the coming years, he urged universities to engage fully in the debate and advocate for more funding for research and innovation at a European and at the national level.

Ole Petter Ottersen, founding Chair of the Guild, discussed the importance of universities not just for ground-breaking research, but also as an integral part of the innovation ecosystem, and urged that universities should have a full stake in the European Innovation Council. The panel also discussed the need to reduce the participation gap, not least through simplifying and enhancing the application of structural funds to support excellent research and innovation. The panel considered how the vision for research and innovation should be aligned with societal concerns. Jan Palmowski argued that an alignment to the UN’s sustainable development goals (SDGs) would enable the EU to make a distinctive contribution to the UN’s agenda through research and innovation, and that this would require the full engagement of all subjects, including the Social Sciences and Humanities.

The vision for European research and innovation was discussed further by a second panel involving Janez Potočnik, former Commissioner for Science and Research and for the Environment, Eva Åkesson, Rector of Uppsala University, and Anneleen Van Bossuyt, Member of the European Parliament. Potočnik opened the discussion with a strong statement on the failures of capitalism, the future of employment and the global challenges that lie ahead. He argued that the fundamental global challenges of inequality, pollution and insecurity did not stop at Europe’s door, and that it was high time for Europeans – and European universities – to engage with these more rigorously. Eva Åkesson articulated the societal impact of universities as educators of up to 50% of our population. She agreed with Potočnik that through research as well as research-led education universities could – and should – engage with the major challenges of Europe and the globe. Anneleen Van Bossuyt added that a vision for research and innovation also needed to include an appreciation of its economic benefits, as for every €1 invested in research and innovation in the seventh Framework Programme, €11 of economic value had been generated. She also highlighted the need for universities to incentivise researchers to achieve impact, and for the EU to support excellence in all aspects of research and innovation.

Closing the Forum, University of Göttingen President, Ulrike Beisiegel, compelled participants to help create environments where knowledge transfer and collaboration can transcend European and global borders. The creation of new knowledge is now more important than ever: where the industrial revolution had led to a fundamental rethinking of knowledge and values in the Enlightenment, so the second transformation of our economic way of life through the internet has challenged us to a second enlightenment. What is at stake, she argued, was nothing less than the creation of research and innovation to make sense of – and give meaning to – our everyday lives.

Guild Forum
E-mail this page
>
2017 > Research, Innovation, and the Future of Europe