Sub menu
Events > 2022 > The Guild seminar series: From Bologna to Bologna and beyond

The Guild seminar series: From Bologna to Bologna and beyond 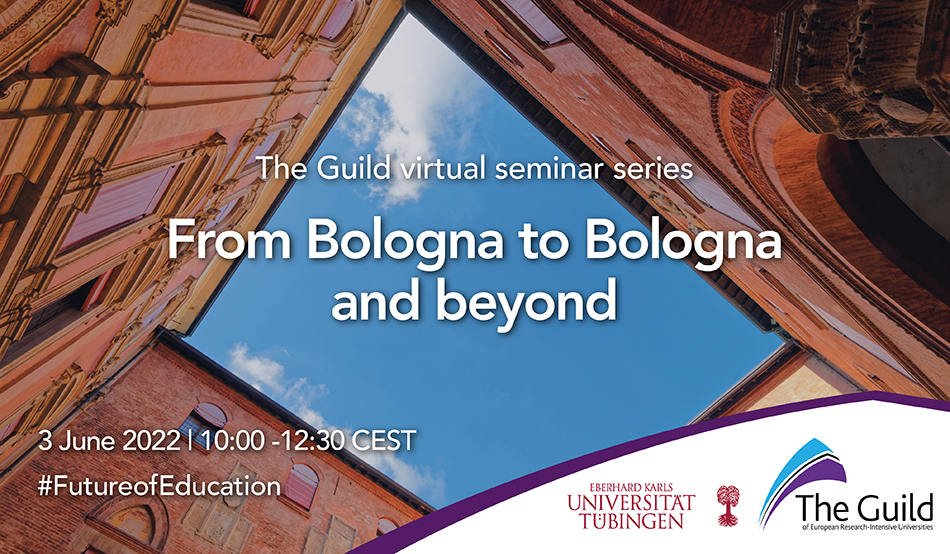 From Bologna to Bologna and beyond is the last in the series of virtual seminars organised around The Guild’s Insight Paper: Reimaging Research-led Education in a Digital Age, authored by Prof. Jo Angouri. In this closing seminar, hosted by the University of Tübingen, the larger ecosystem of education which characterizes modern research-intensive universities will be explored.

Naming the Bologna process after Europe’s oldest university was a brilliant idea to indicate where we are (or should be) heading. To suggest coming full circle after a thousand years, the biggest obstacle to a common European vision for universities remained invisible - its national embeddedness. And this national embeddedness is most jealously guarded when it comes to teaching. It is not surprising that the European University alliances are mostly struggling in this area.

While research has never stopped at national borders, the integration of universities into national education systems was linked to the fact that their teaching was meant to answer the national labour market: the prevalence of the national language(s) at least up to the master’s level is a case in point.

On 3 June our panelists will explore the tensions, but also possible solutions to the dilemma of multilayered bureaucratic requirements in teaching with the openness and freedom of research, at a time when teaching is no longer to benefit a chosen few but targeted at people in all walks of life and throughout their adult life. Watch previous seminars here.

Download the new Insight Paper "Reimagining Research-led Education in a Digital Age" and watch the recording of the event below.

10:35  Reflections on the seminar series by higher education leaders

11:15  Which way forward for the higher education sector?

E-mail this page
>
2022 > The Guild seminar series: From Bologna to Bologna and beyond